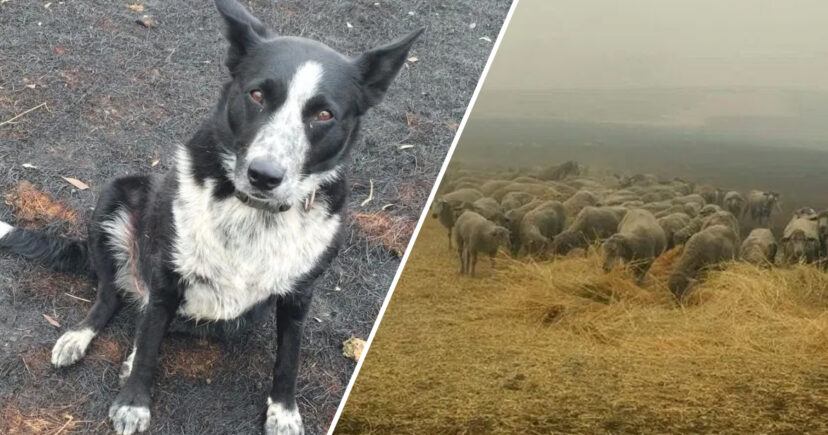 A border collie made a heroic gesture after she saved a flock of sheep during devastating wildfires in Australia.

Patsy, the hard-working dog, and her unnamed owner bravely faced the wildfire on New Year’s Eve as they burned across Corryong, Victoria.

The flames were getting closer to Patsy’s owner’s land. However, Patsy and her owner ventured out to make sure the sheep were safe.

Read More: This Twitter Thread On The Australian Bushfires Shows Just How Bad Things Are

A post shared by Patsy The Wonderdog (@patsythecorryongwonderdog) on Jan 5, 2020 at 6:32pm PST

Cath Hill, the sister of Patsy’s owner, posted a picture of the ‘wonder dog’ on Instagram. She also said that Patsy made sure the flock of sheep were safe before going back out to the front line.

Cath wrote on Instagram: “This is Patsy just after she and her human brought the sheep to safety on the morning of New Year’s Eve.” Patsy waited patiently with him until the fire got close enough to fight with a tractor and water pump. They are an incredible team!

Although Patsy’s owner doesn’t have a profile on Instagram, his story is still heard. Thanks to the hard work of Patsy and her owner, all sheep were saved from the wildfires.

Here is a video of Patsy in which she is praised for her job well done:

The video immediately went viral and has been shared more than 6,000 times since it was uploaded. Cath saw this as an opportunity to ask for donations to help fight the wildfire crisis. You can donate to her GoFundMe fundraiser.