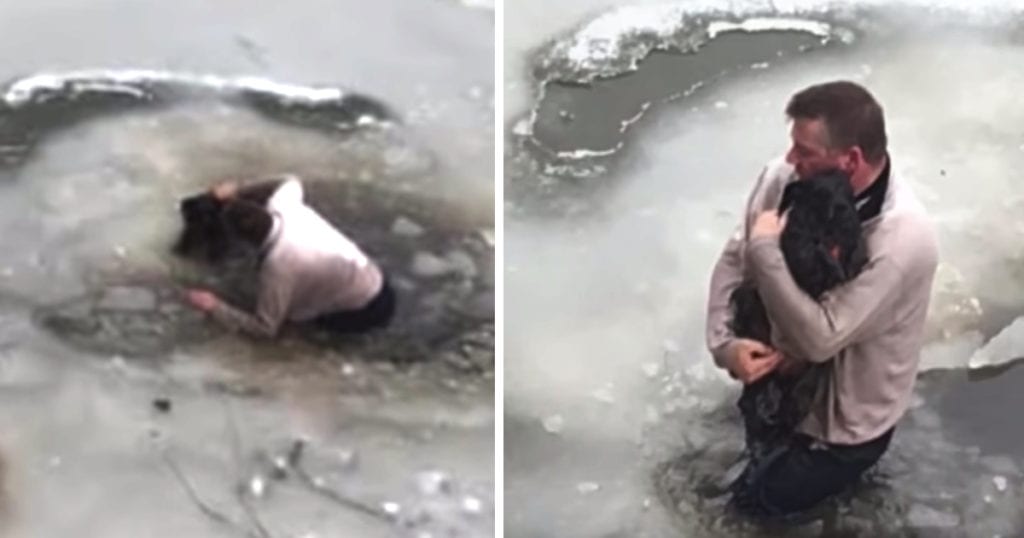 A video about a dog that was saved from freezing in a lake by a brave man has been shared on social media, instantly becoming viral.

Don Chatten is the hero of this story. He was walking his two dogs at the Bark Park at Ellicott Creek Park. Suddenly, one of Don’s dogs started acting out, and he immediately knew something wasn’t right. He didn’t know exactly what was wrong until he heard a whimpering coming from a distance.

When Don and his pets went down to the creek below, they saw a tiny, helpless dog on the icy water.

Although Don called for help, he was running out of time. The dog was crying for help and Don couldn’t wait for the rescue team. He saw that he wasn’t going to survive much longer, so, he jumped into the icy water. The courageous man broke the ice with his bare hands and walked in the freezing water, all the way to the poor dog. Then, Don grabbed the dog and brought him back to the solid ground.

The cute dog was a Terrier mix named Jackson, who had been missing for a while. Don took Jackson to the vet to make sure he was ok. Jackson received emergency care for hypothermia the moment as soon as he arrived.

The vet said that Don’s quick reaction saved the dog’s life. In the end, Jackson was reunited with his owner.

In spite of his new title, Don says that his dog should receive the credit for saving Jackson because he was the one who felt that something was wrong.

Both of them are heroes and we’re lucky to live in a world where there are people like Don, and dogs like his.