Service Dog Graduates From Grad School Together With Owner 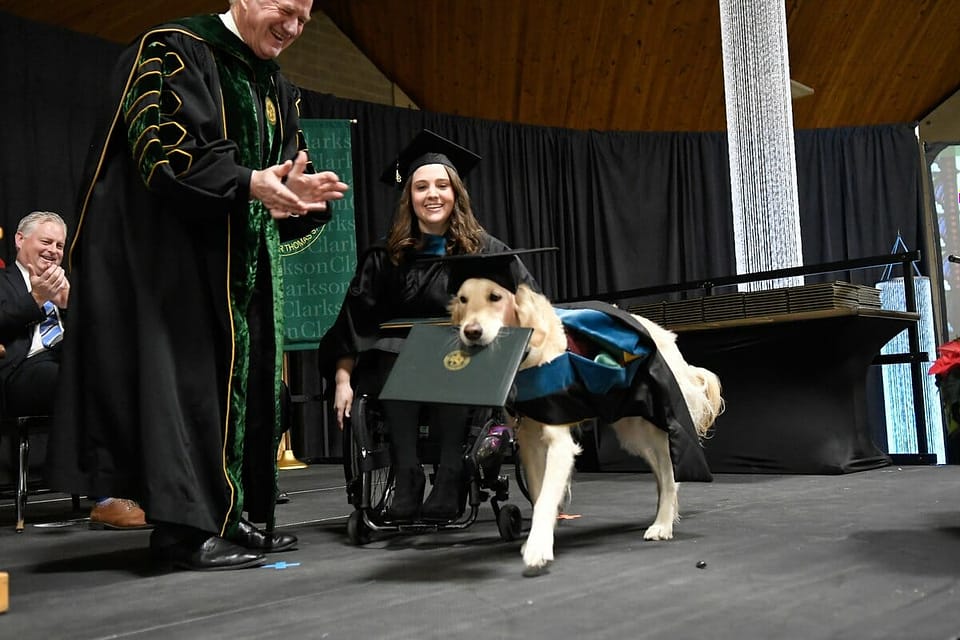 Service dogs are absolute godsend! People in need can really feel blessed if they have a service dog by their side. They offer an emotional support, can react in medical crisis, are are still fun and playful as any other dog.

When Brittany Hawley, from Wilson, North Carolina, graduated from Grad school, the university gave her service dog a diploma as well! How thoughtful is that?

Brittany is in a wheelchair due to a condition called complex regional pain syndrome. The amazing service dog was given to her through paws4prisons program.

“Some dogs were scared of the wheelchair,” Brittany told AP. “Griffin jumped right into my lap and licked me across the face.”

And that moment showed Brittany that Griffin is the best choice for her.

Luckily, Griffin entered Britany’s life at the perfect moment; when she started her studies at Clarkson University to get her master’s degree in occupational therapy. Griffin accompanied Brittany in classes and helped her with opening doors and fetching supplies. He also proved to be a comforting friends during periods of anxiety and depression.

“I felt more independent, I was more social, I felt more outgoing with him,” Brittany told CBS News.

“We moved to New York together, we started school together and we finished together,” Brittany said.

However, she didn’t just want him by her side, however—she wanted him to have his own degree.

“I pushed from day one, when I graduate, I want Griffin to graduate with me.”

Much to her surprise, the University delivered. Griffin received his diploma for “extraordinary contributions to student success.”

“The Board of Trustees recognized that Griffin has demonstrated extraordinary effort, steadfast commitment, and diligent dedication to the wellbeing and student success of his owner Brittany,” Clarkson said in a statement.

“The two have pursued 100% together a graduate degree in Occupational Therapy attending all the same classes, lectures, faculty appointments … fully making Griffin an equal member of the Clarkson Golden Knights family.”

@dog_rates This is Griffin the Service Doggo. He received an honorary diploma this weekend for attending every single Occupational Therapy Class with his owner at @ClarksonUniv pic.twitter.com/VgK4ZbTt1E

“Whenever I get a job, he will be with me every single day,” Brittany said.