A Puppy Saved By Meat Loaf Gets To See What’s It Like To Live Like A Rock Star! 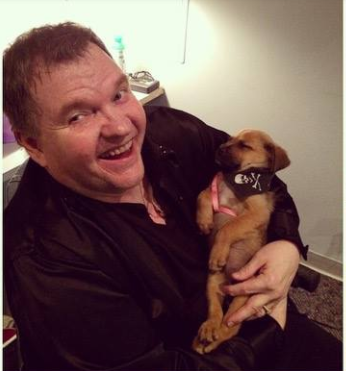 When you hear the name Meat Loaf, the thing that goes through everyone’s mind is “I would do anything for looove, but I won’t do that”.

The catchy ballad sure is an earworm, but in his spare time Meat Loaf does more than writing catchy songs – he saves lives too!

Back in 2015 while touring, during a rehearsal in New Mexico the band found a puppy abandoned in a dumpster. The crew knew exactly what to do and showed their humanitarian side on the spot! They took the puppy out and provided the help it much needed.

After a quick visit at the vet, the puppy got the experience of a lifetime; an experience many of us dream of! She got to tour with a rock band!

The puppy appeared on Meat Loaf’s Facebook photos where the singer joked how it was “adjusting to life on the road” while chilling in his lap, posing with the guitars and posing with the band on stage.

However, the life of a rock star isn’t quite suitable for a young pup. The band soon realized they should find it a forever home.

“We’ll miss her but she’s on her way to her new momma and sisters and a big ole ranch to run around,” Meat Loaf wrote.

While the puppy may be gone, she’ll always be a part of the band: