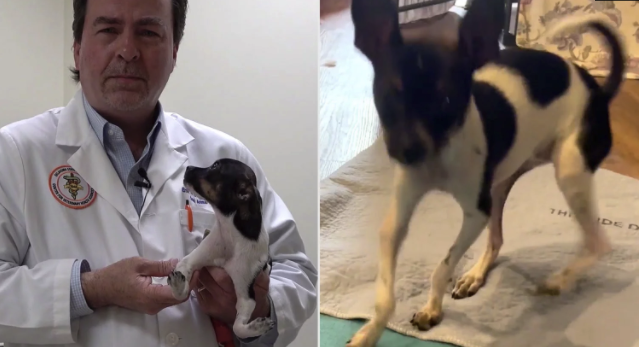 Siggi, the unique puppy born with upside-down paws can finally run and play thanks to reconstructive surgery.

Dr. Erik Clary, the one who changed the puppy’s life, says:

“Siggi [is] doing many things that puppies like to do, including chasing a ball in the yard.”

Having a previous experience with a dog named Milo, the physicians at Oklahoma State University’s Veterinary Teaching Hospital agreed on taking Siggi’s case.

The 13-weeks old rat terrier underwent the surgery after his caregiver introduced Dr. Clary to Siggi.

“As with Milo, Siggi’s problem lookedlike it was in the paws, but it was actually in her elbows,” Clary said in the release.

“For reasons not fully understood, these patients’ elbows come out of joint early in life, and the result is a severe rotation of the lower front limbs and an inability to walk. At most, they might muster a crawl that seems most uncomfortable and is poorly suited for a dog’s life.”

Unlike Milo, Siggi had a “significant deformity” in the lower part of her elbow bones. This is why Dr. Clary opted for an “intentional break high up in her ulna bone to de-rotate the limb.”

Siggi had the surgery on May 12th and had splints and casts on both front legs. On June 29th, during the check-up, after having done an x-ray, a vet confirmed that the legs were in great condition and healed.

“At that stage, the task then became one of teaching her how to walk, and she proved a fairly quick learner,” Clary said in the release. “Lorraine, her medical foster with Dallas Dog RRR, did a fabulous job implementing an incremental rehabilitation regimen that now has Siggi doing many things that puppies like to do, including chasing a ball in the yard.“

“Truly, I could not be more pleased with Siggi’s progress.”