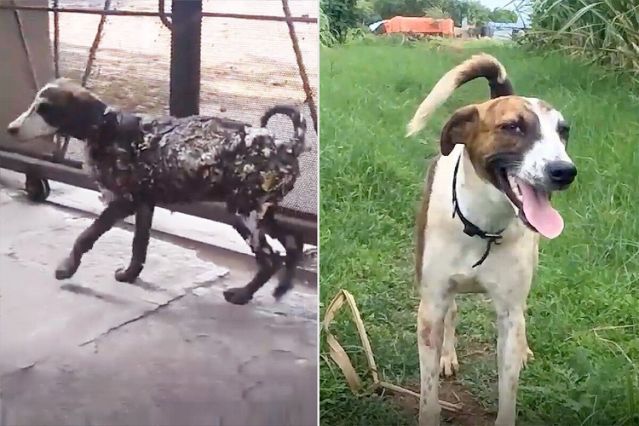 The number of abandoned dogs is increasing, many of these innocent creatures, are ruthlessly thrown out of their owners. Some of the people they meet outside do everything they can to help them, while others, unfortunately, often bully them.

Stray dogs are often exposed to risks, such as weather disasters, malnutrition, disease, and violence. Whenever you look at them on the street, they naively look at you, hoping that you are the person who will adopt them and provide them with a warm home filled with love.

Some time ago, a dog was found in India alerting for help. The dog, named Champi, was adopted by one of her rescuers. Champi was barely recognizable as a dog when one of the staff at an animal rescue center in Solapur, India, found her on the side of the road. 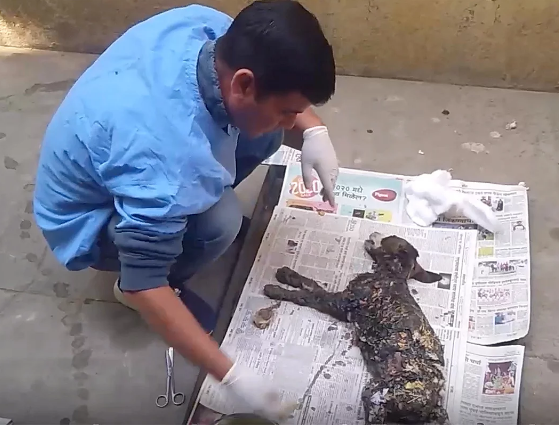 The dog was stuck on the sidewalk, unable to move and covered in coal and debris before being taken away by Animal Rahat staff, according to the PETA-supported animal welfare organization.

After the puppy was cared for by the organization, it took them four days to completely clean the Champi’s tar and the remnants of her skin with the help of vegetable and coconut oil to keep the process as painless as possible.

Champi was too uncomfortable, but she was brave and resilient, says Animal Rahat. The video shows how a Champi, initially barely moving covered in debris, turning into a happy and playful puppy.

Over time, her skin heals and she is now covered in a full coat of brown and white fur.

Now she lives with one of her rescuers and is surrounded by other animals, including fellow dogs and some chickens.

Despite her difficult past, her sweet and playful personality began to shine and when she was finally without the tar, one of her rescuers made her part of his family, said Animal Rahat in the description of the video.

Check out the video below.