Video Shows Woman Abandoning Her Dog at Park, Pup Ends Up In Shelter 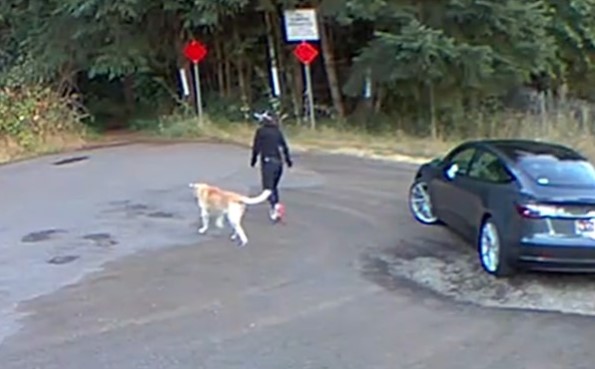 Many people own dogs. In fact, they are the most loyal creatures and devoted to their owners. But how many dog owners actually deserve these amazing creatures?

Recently, a video of a woman abandoning her dog at a local park was shared on social media. This cruel woman even tricked the poor dog just so she can abandon him.

The disturbing scene took place at the Orchards Community Park in Vancouver, Washington. In the video footage, you can see a woman pulling up in a Tesla. She tricks the dog to go into the woods and she left the poor animal there. Then, the woman ran back to the car and drove off.

After the video emerged, an investigation has been launched and it’s handled by Clark County Animal Protection and Control.

Fortunately, the yellow labrador has been rescued and is currently staying at the dog shelter called “I Paw’d it Forward.” The shelter employees confirmed that the dog is safe now.

Many people are interested in adopting the lab. However, the shelter said that the dog will not be up for adoption until the investigation is completed.

According to Clark County Animal Protection and Control, the driver of the vehicle seen in the video will potentially face a misdemeanor or civil infraction for animal cruelty. Authorities are now asking the community to help them recognize the woman or the labrador.

This case shows that not everyone deserves to be a dog owner. Hopefully, this furry friend will find a better home once the investigation is finished.

This woman decided that abandoning her dog in the woods without any food or water. She needs to be found and face the consequences of their cruel actions. Not everyone is capable to take care of a dog.