Militant Antifa Crew Trashes A Vehicle With Dog Inside 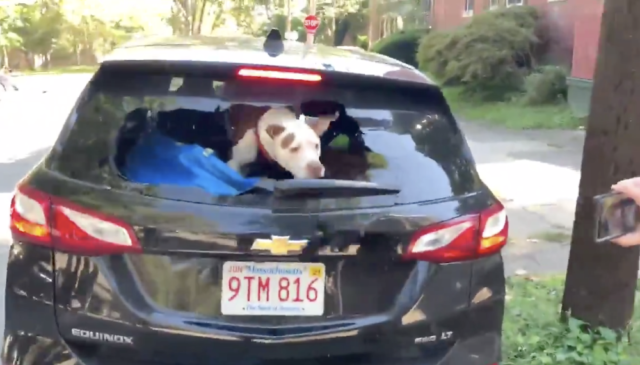 Violent far-left rioters trashed a vehicle with a scared dog inside in Philadelphia over the weekend. They caused the driver to drive away while he was assaulted, threatened, and his SUV was damaged.

Journalist Andy Ngo managed to catch the entire violent encounter on camera and later shared in on Twitter. He wrote: “Antifa black bloc militants smash up a car that has a dog in the back. Far-left rioters gathered today to oppose a right-wing event at Clark Park.”

Philadelphia: #Antifa black bloc militants smash up a car that has a dog in the back. Far-left rioters gathered today to oppose a right-wing event at Clark Park. Video by @ElijahSchaffer: pic.twitter.com/glB4RNNTBk

Another journalist named Elijah Schaffer commented about the scene, saying Antifa attacked an Anti-Trump protester and called him a Nazi by mistake. They destroyed his vehicle as he was trying to escape after he tried to attack content creator @realJamesKlug with a bar. The dog inside the car was clearly frightened and was barking while black bloc smashed the windows.

A dog is in the back, clearly terrified, & barks as black bloc smashes his windows pic.twitter.com/P2eXbS1Ru9

According to reports, the driver and his dog were not physically harmed during the incident, but the same can’t be said about the SUV. Unfortunately, the car sustained severe damage. There aren’t any reports of an official police officer as a response to the unfortunate incident.

BREAKING: a protester comes alongside creator @realJamesKlug with a bat and hits the ground next to him with force

The crowd then turns on the man and confuses him for being a Trump supporter, calling him a Nazi

They proceeded to destroy his car with hammers as he escaped pic.twitter.com/MPdP6Z1atf

During the protests, people were holding “Biden/Harris” signs. Social media users were not happy with the video and the violent rioters who attacked a person, his dog, and trashed his vehicle.