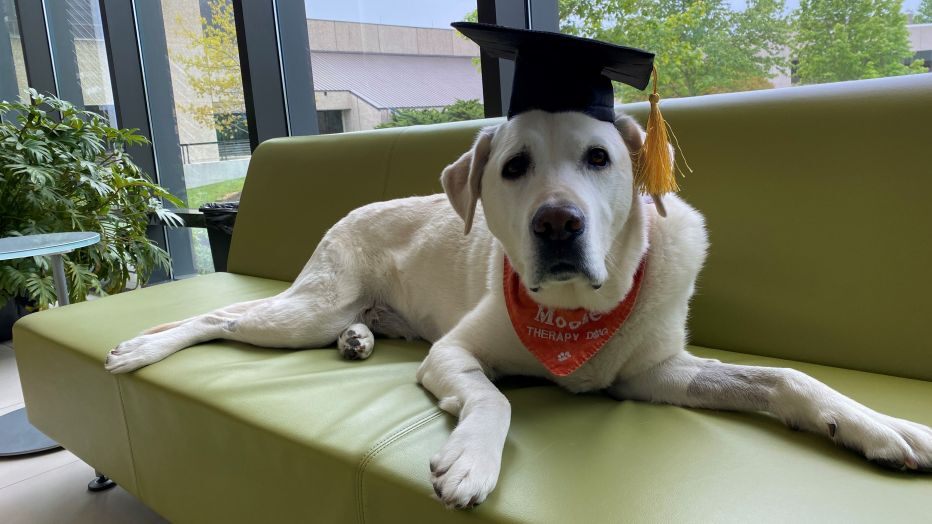 A dog recently graduated at a virtual commencement ceremony at Virginia Tech. The dog named Moose came to the university in 2014. He’s a good boy who has a lot to celebrate.

The university announced that the 8-year-old therapy dog received an honorary doctorate in veterinary medicine this Friday. He is one of the four dogs who worked as therapy animals and ambassadors to raise awareness about mental health.

The Labrador retriever took part in 7,500 counseling sessions and over 500 outreach events in his six years at Virginia Tech, according to his owner Trent Davis, the coordinator of animal-assisted therapy and a counselor at the center.

After Moose celebrated his birthday in February, he was diagnosed with prostate cancer. So, he’s been facing a challenging few months. He started radiation, chemotherapy, and other therapies at the Virginia-Maryland College of Veterinary Medicine, which is located in Blacksburg. According to the college, the dog will continue to receive the treatments and his prognosis is positive, so far.

Moose is now back to work with his dog colleagues Wagner, Carson, and Derek, whose owners also work at the counseling center. All of them are helping to raise awareness about mental illnesses.

Last year, the Labrador retriever received the Virginia Veterinary Medical Association’s Animal Hero Award. In fact, this honor is usually given to animals who provided outstanding services for humans.

When the dog isn’t working, he loves to swim, play, and eat! We wish him a full and speedy recovery to health!